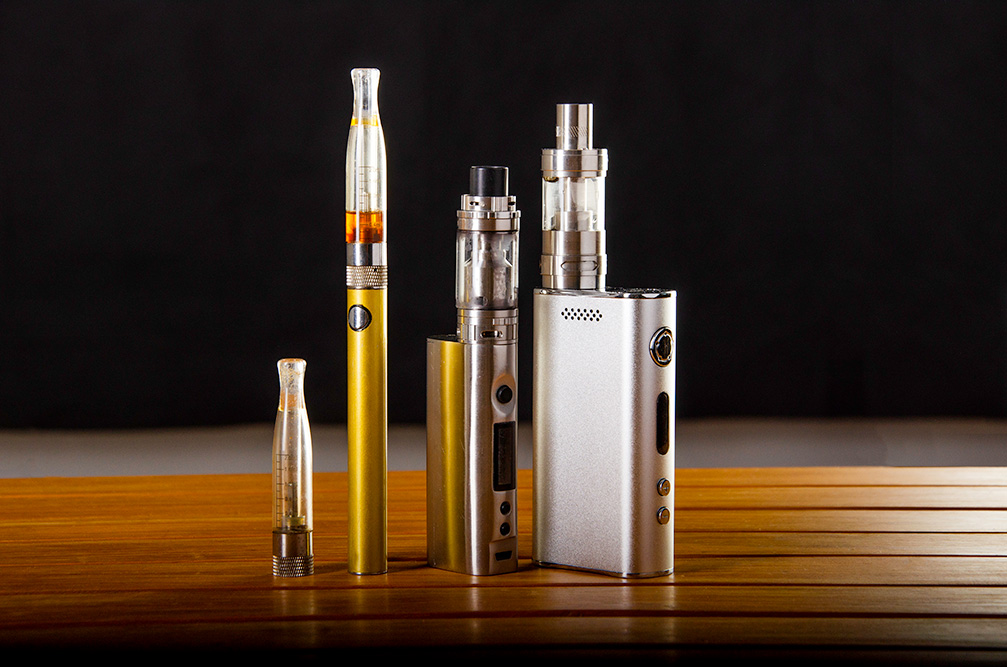 An e-cigarette (e-cig) or vaporizer pen (vape) is a device that contains liquid nicotine that is vaporized and inhaled, and is used to recreate the feeling of smoking a real cigarette. The liquid comes in many different flavors such as; Tuti Fruiti, Vanilla Mocha Frappe, Peanut Butter Cup, Cinnamon Roll, Carmel Apple and more, making it more appealing to young adults. E-cigs/vapes come in various sizes, models, and colors.

The Cartomizer is filled with the flavored E-liquid, which contains nicotine. When the power button is activated, the user inhales which activates a sensor that detects air flow. This process then allows the E-liquid to heat up in the replaceable cartridge, causing the liquid to vaporize.

E-cigs/vapes are marketed as a healthy alternative alternative to smoking real cigarettes and/or cigars, however, they have just as many health risks as smoking tobacco.

According to 2018 National Youth Tobacco Survey (NYTS) data, current e-cigarette use—or “vaping”—among middle and high school students increased alarmingly between 2017 and 2018, with over 3.6 million kids currently using e-cigarettes in 2018. Each year, the NYTS—a nationally representative survey funded by FDA and CDC—sheds light on the latest rates of tobacco use among both middle and high school students. In recent years, e-cigarettes have become the most commonly used tobacco product by U.S. teens; however, rates of use generally declined between 2015 and 2017. Unfortunately, the 2018 NYTS data show a sharp and startling reversal of overall declines in youth tobacco use from previous years. 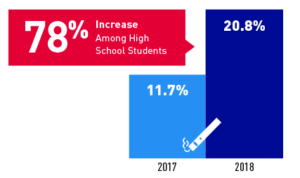 Source: 2018 NYTS Data: A Startling Rise in Youth E-cigarette Use 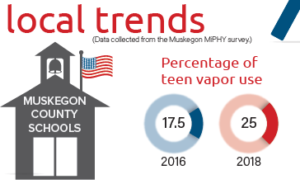 One of the popular drugs to smoke out of an e-cig is Marijuana or dry herbs. EGO-compatible e-cigarette batteries and a dry herb cartridge, are widely used for turning the e-cig into an electric pipe (or e-blunt).

Oils, Waxes, and other THC Concentrates

Vape, hash oil, wax, budder, shatter, BHO, full-melts, or any other form of concentrates are all forms of a much higher THC level version of marijuana that can be used in e-cigs. E-cigarette batteries, concentrate cartridges, or glass globes are used to smoke these concentrates.

THC E-liquids (also known as tinctures) are just as potent as other THC concentrates that can be found in e-cigs. Those who already have Medical Marijuana cards (especially in California), can buy pre-filled tincture cartridges from other retail stores, or they can make their own tinctures. E-Liquids do not produce much of a smell, so they are more discrete than others.

On August 8, 2016, the FDA began to regulate E-Cigarettes including, hookah tobacco, and cigars. Retailers, manufacturers, and consumers must comply with all applicable federal laws and regulations. Please visit the FDA.gov for more information.

On June 4, 2019, Michigan Gov. Gretchen Whitmer signed Senate Bills 106 and 155 that prohibits the sale and possession of e-cigarettes to anyone under the age of 18 years old.

In December 2019, President Donald Trump signed legislation to increase the legal age to buy or use tobacco products, including vapes, to 21.