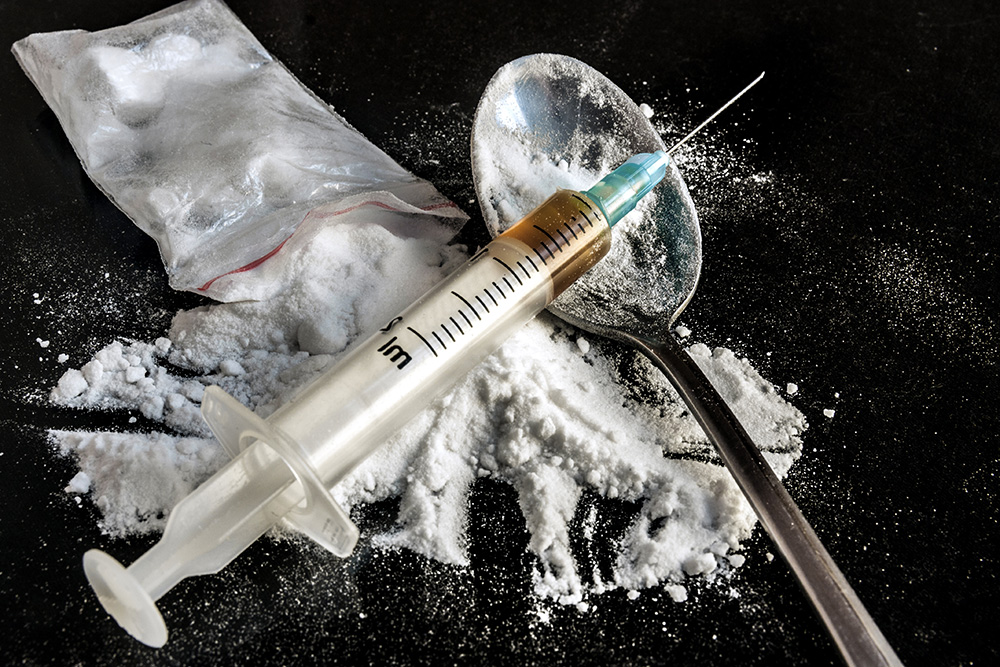 Heroin is a synthetic opioid, made from morphine that is extracted from the seed pod of the Asian opium poppy plant. It usually appears as a white or brown powder or as a black sticky substance, known as “black tar heroin.”

Heroin can be injected, snorted, or smoked. All three routes of administration deliver the drug to the brain very rapidly, which contributes to both health risks and a high risk for addiction.

After an intravenous injection of heroin, users report feeling a surge of euphoria (“rush”) accompanied by dry mouth, a warm flushing of the skin, heaviness of the extremities, and clouded mental functioning. Following this initial euphoria, the user goes “on the nod,” an alternately wakeful and drowsy state. Users who do not inject the drug may not experience the initial rush, but other effects are the same.

Heroin abuse is associated with a number of serious health conditions.

Some of these health conditions include:

Complications of the lung, including various types of pneumonia, may result from the poor health of the user as well as from heroin’s effects on breathing.

In addition to the effects of the drug itself, street heroin often contains toxic contaminants or additives that can clog blood vessels leading to the lungs, liver, kidneys, or brain, causing permanent damage to vital organs. In recent years, fentanyl has been commonly added to heroin, which contributes to a higher risk of overdose and death, due to its high potency (roughly 80-100x more potent that morphine).

Chronic use of heroin leads to physical dependence, a state in which the body has adapted to the presence of the drug. If a dependent user reduces or stops use of the drug abruptly, he or she may experience severe symptoms of withdrawal. These symptoms—which can begin as early as a few hours after the last drug administration—can include:

Users also experience a severe craving for the drug during withdrawal, which can lead to continued abuse and/or relapse.

Researchers are investigating the long-term effects of opioid addiction on the brain. Studies have shown some deterioration of the brain’s white matter due to heroin use, which may affect decision-making abilities, the ability to regulate behavior, and responses to stressful situations.

In addition to the risk of spontaneous abortion, heroin abuse during pregnancy (together with related factors like poor nutrition and inadequate prenatal care) is associated with low birth weight, an important risk factor for later delays in development. If the mother is regularly abusing the drug, the infant may be born physically dependent on heroin and could suffer from neonatal abstinence syndrome (NAS), a drug withdrawal syndrome in infants that requires hospitalization.

Heroin overdoses involve a suppression of breathing. This can affect the amount of oxygen that reaches the brain, a condition called hypoxia. Hypoxia can have short- and long-term psychological and neurological effects, including coma and permanent brain damage. In 2017, there were 2,033 opioid overdose deaths in Michigan, which is roughly double the rate from 2014. The recent spike in overdose deaths was due in large part to synthetic opioids, such as fentanyl, which contributed to 1,368 deaths (up from 72 deaths in 2012). Deaths involving heroin rose from 263 to 783 in the same 5-year period.

What is the scope of heroin use in the United States?

According to the National Survey on Drug Use and Health (NSDUH), in 2016 about 948,000 Americans reported using heroin in the past year, a number that has been on the rise since 2007. This trend appears to be driven largely by young adults aged 18–25 among whom there have been the greatest increases. In contrast, heroin use has remained low among teens ages 12–17. Past-year heroin use among the Nation’s 8th-, 10th-, and 12th-graders remained below 1 percent for all 3 grades and lifetime use of heroin finally fell below 1 percent for all 3 grades as of 2015, and remained low through the 2018 survey cycle.

Content courtesy of:
Drugabuse.gov – Heroin
samhsa.gov – The Truth About Heroin