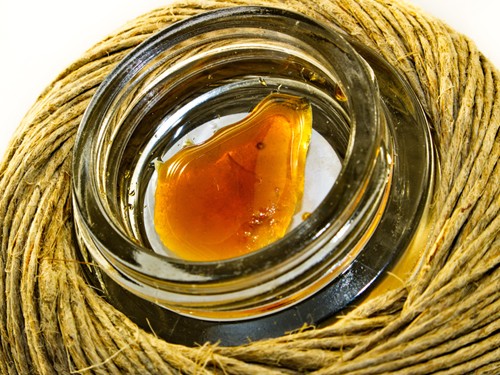 Both products are marijuana concentrates.

Marijuana Oil is the concentrated liquid extracted from the marijuana plant. The oil also called Cannabis Oil is a thick, sticky substance made from the cannabis flower using a solvent extraction process.

Marijuana Wax is a concentrated form of marijuana that looks like ear wax. Wax is compressed from cannabis oil, it is robust enough to hold its form on a flat surface after it’s cooled. It is typically tinted yellow and may be kept on wax paper or in small containers.

Waxes & oils can have up to eight times the concentration of THC compared to the buds people typically smoke. Wax is reported as being the purest cannabis product available, at anywhere between 82% and 99.7% pure THC.

Once marijuana oil has been created, it can be smoked in a slightly altered bong “rigs” and/or vape pens. Vaping is considered an efficient way to use it because of the higher temperatures required to evaporate the drug. Vaping marijuana concentrates is also very discrete and can be hard to identify as drug paraphernalia while putting off very little odor.  E-cigarettes and vape pens can make it odorless and smokeless, meaning it is exceedingly easy to conceal.

Wax and oils have become increasingly popular on college campuses over the last five years. It has also been found in the possession of high school students. It is referred to as weed wax, dabbing, dabs or butane hash oil (BHO), which explains its 710-slang term (the number 710 spells oil upside down and backwards).

Another popular way of consuming marijuana concentrates oil is through food edibles. Edibles like marijuana brownies, cookies, and cake are common and especially dangerous because they risk being consumed by people unaware of their contents. Dispensaries commonly sell marijuana lollipops and other candy.

Predictably, the psychological effects, or highs, are much more intense from wax than from smoking the plant. Accordingly, it is more expensive than the plant, but it may last users much longer because it takes much less of the drug to get high.

Marijuana and its concentrates are like other drugs in that they stimulate dopamine in the brain and can have an impact on brain chemistry. The long term effects of THC exposure to the brain are not definitive, but some studies have shown THC exposure can lead to cognitive decline, especially if it begins when a user’s brain is still developing.

Several studies show teens who report marijuana use go on to try more serious drugs, giving weed the label as a gateway drug. The potency of wax makes it reasonable to assume any adverse effects associated with marijuana are heightened by smoking wax.

The process of making wax and the inexperienced people sometimes doing it means that unintended hazardous chemicals can also end up in the oil substance, potentially causing harm to users’ brains and respiratory systems.

Burns when smoking or making marijuana oil are also common. That’s because making it typically requires butane, a highly volatile and flammable gas.

The short and long term of effects of smoking Wax is the same as smoking marijuana, including:

You may also see clothing or fliers with the term “710.” This term is similar to the street level term of 420, which is the universal time and date to get high. In this case, 710 is the word “OIL” turned upside down, making it a popular drug reference.

Get the Facts: Dangers of Marijuana Wax
Everything You Need to Know About Concentrates
Vaping 101